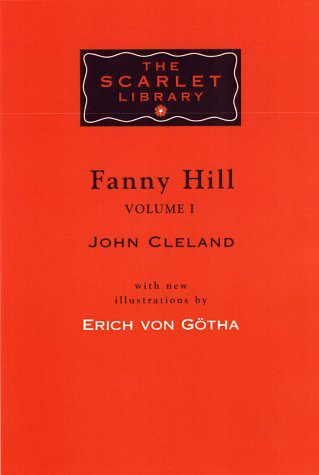 I have to admit to a penchant for vintage erotica – from true classics like John Cleland’s Fanny Hill through to more obscure titles, such as The Scarlet Library’s reprint of A Night in a Moorish Harem, first published in 1890.

The tale takes the form of several stories within a greater story, told to a marooned English sailor by the inhabitants of a coastal harem; the women take turns telling their saucy tales as well as taking pleasure from the sailor himself – the stories winding into the narrative smoothly. Each could be read as a stand alone vignette; I can dip into the book as well as read from cover to cover.

Memoirs of a Woman of Pleasure, better known as Fanny Hill, is a longer novella – it tells the story of Fanny, a country girl who travels to London for work, but instead falls into the trap laid by a brothel-keeper, turning her into the titular woman of pleasure. Fanny tells her own story, beautifully written with glorious attention to Fanny’s own pleasure;

“I gazed at it, I devoured it, at length and breath with my eyes directed intently to it, til his getting upon me, and placing himself between my thighs, took from me the enjoyment of its sight, to give me a far more grateful one in its touch, in that part where the touch is so exquisitly affecting… I felt with too great a rapture of pleasure the first insertion of it, to heed much the pain that followed; I thought nothing too dear to pay for this richest treat of the senses; so that split up, torn, bleeding, mangled, I was still superiorly pleased and hugged the author of this delicious ruin… I lived but in what I felt only.”

Fanny Hill has been published many times over, in many forms; The Scarlet Library have reprinted it in the two volumes it was originally published as, with glorious illustrations by Erich von Götha. The scarlet covers make for a sensuous, vintage feel, keeping the erotica under wrappings that only hint at the delight within.

I love these books; they were among the first erotica I ever read, and have since become firm favourites (to the point where I own multiple copies of Fanny Hill), and the centre of my still-growing collection. Even if vintage erotica isn’t your kink, they are still worth enjoying – and you never know, they might just be the start of a new adventure.

Several modern artists continue working in the tradition of vintage erotica, bound to appeal to those appreciating Fanny Hill. One of the main ones is Olivia De Berardinis, see here for more of her pin-ups.