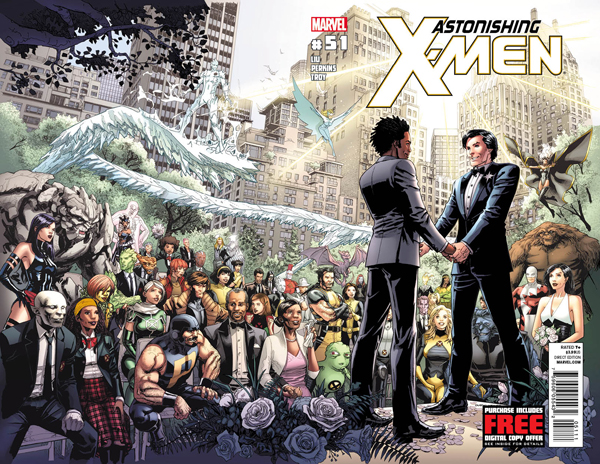 Wedding bells are in the air following the release of the May issue of Marvel's 'Astonishing X-Men'. The openly gay superhero Northstar proposes to his long-time partner Kyle Jinadu. Northstar and Jinadu's marriage ceremony will be in New York's Central Park in issue 51, available this month.

Although gay characters aren't new in comic books, and Marvel's Northstar is just one of the characters to be revealed as gay, it is exciting to see a major brand such as Marvel promoting gay rights. DC Comics' Batwoman is also gay, as is a recently new character in the Archie Comics, who got married earlier this year. With gay superheroes becoming more mainstream, speculation has risen over which longstanding characters might also be revealed as gay.

This wedding is making history in the comic book world and it is fantastic to see how art is imitating life in the newly-changed law in New York State that allows gay couples to get married.

To read more about the X-Men wedding see the Guardian and for an interview with the creators of the Marvel comic, check out The Huffington Post.