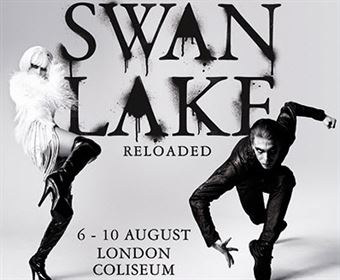 It was the black thigh boots that did it, capturing our eye on one uneventful tube journey. Our interest perked up, we then noticed that the pair of PVC-clad legs came with an unexpected caption of "Swan Lake Reloaded", showing 6-10 August at the London Coliseum.

Performed for over 130 years in multiple incarnations, "Swan Lake" is a story of love, betrayal and sudden death, as well as male/female power struggle. The original sheet music, commissioned in 1875 by the Bolshoi Theatre in Moscow, was originally found conceptually challenging, too difficult to dance to, and thus was arbitrarily changed by Julius W. Reisinger, the choreographer (or the "ballet master") at the time.

The latest Fredrik Rydman production was inspired by a 2009 visit to a vintage boutique in Camden, and the white furs hanging in the window. These looked like swans, Rydman thought, and what a perfect image for prostitutes. The resulting production is the latest take on a classical ballet, alternative in a different way than Matthew Bourne's was.

Fredrik Rydman's version is a modern dubstep / classical fusion, with some rnb stirred in. It combines street dance and instrumentals, with Tchaikovsky's original notes weaving in and out.

It is a visual feast also - and, viewed with our kind of mind, a rather kinky one! In addition to the night trash outfits, there is leather, and some metal brassieres doubling as a setting for picture frames and candle sticks.

There is innocence ruined, there is objectification, as well as a fair measure of despair and degradation (evocatively depicted by vermin, projected onto "the girls" as they dance amidst red neon lights).

It is also not often that one hears "f***s" flying off stage at the Coliseum... and the audience perfectly nonplussed.

It is a rare piece that appeals to both theatre and Torture Garden goers, as "Swan Lake Reloaded" does.